Hello!
What kind of food do you eat during the New Year?

I would like to introduce Japanese New Year’s cuisine which is called “Osechi cuisine”. 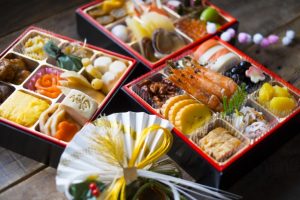 What are New Year dishes?

“Sechi” represents various seasons.”Osechi” refers to some holidays held in the Japanese court.

The most important of the holidays is the New Year.

For that reason, the food we eat during the New Year is called “Osechi Cuisine”.

What does ”Osechi Cuisine” mean?

Many Osechi dishes last for a long time.

They do not spoil easily.

They are  either boiled, dried, soaked in vinegar, and strongly seasoned.

There is a belief that you should avoid cooking that uses fire during the New Year because I thought of fire as a god.

It is also to free women from housework.

In the old days, the stores were closed on New Year’s Day so it was necessary to make it.

Right now, there are convenience stores that are open 24 hours a day, 365 days a year.

What are the kinds of Osechi cuisine ?

・黒豆 Black beans -one of the soybean varieties, softly boiled in sugar and soy sauce 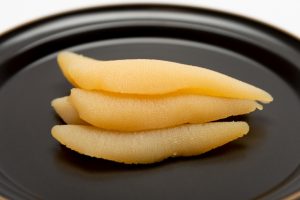 ・ 伊達巻きDatemaki -fried egg with white fish added to the egg

・ 昆布巻きKonbu maki -fish such as herring wrapped in kelp and boiled 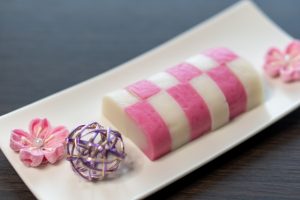 What is the significance (sig-nifi-kans) of Osechi dishes?

・ Being healthy without getting sick 無病息災

What is the container for Osechi cuisine?

It is packed in a lacquer box.

Officially it is five-tiered, but three-tiered is common. 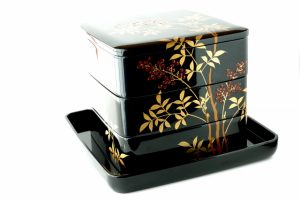 How to serve Osechi cuisine? 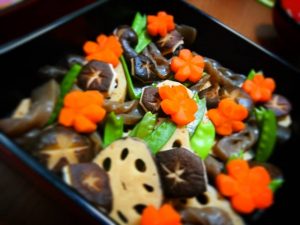 What are the rules for serving?

Cooking at home according to these rules is difficult.

Many people buy Osechi cuisine at department stores and shops.

Recently, due to the coronavirus, large numbers of people have been stopped from eating out.

People were discouraged from going to their hometowns last New Year because old people have high risk for Covid 19.

It seems that  single servings of Osechi were popular this year.

How was your new year?

Take a big bite and crack a wide smile!

See you in the kitchen!

Thank you for reading.

Do you know sake lees? ”Sake Kasu” in Japanese